How do you photograph your gőzgéps?

The first trick is to get a reasonably good, plain backdrop. We used a left over strip of photo backdrop paper, roughly 1.5 x 2.5 metres. This stuff is made by Coloroll and comes in 11 metres long x 2.75 metres wide rolls - looks like a giant toilet roll! For a full-length human shoot, one needs enough paper to reach from the ceiling, down to the floor, and along a bit. Therefore, the last 2.5 to 3 metres or so on any roll are useless anyway because it will barely even touch the floor. So, instead of binning it, we use it for shooting small items. We literally cut up what we need, stick it on a wall with gaffer tape, and drape it over a table - with the other end held in place with large bulldog clips. Our mini studio ain't a pretty sight. A fact to which the following picture will bear testament:- 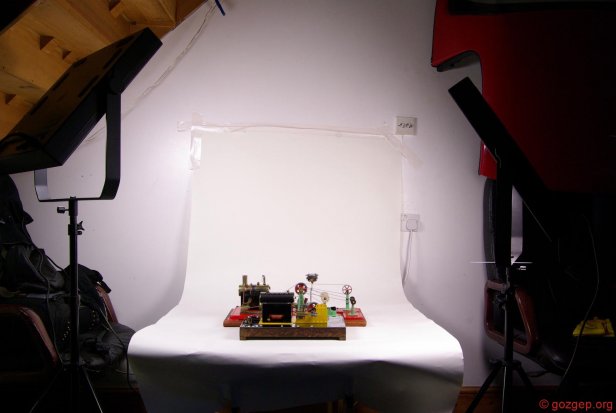 The next trick is not to use flash. Taking pics of small shiny things, even in a light box, is very tricky with flash because it is hard to predict exactly where the light will end up. So instead, we use a pair of permanently-lit, Courtenay Paterson "Digilites". These are basically plastic boxes roughly 500 mm x 500 mm x 80 mm deep, mounted on standard Paterson light stands. They are literally stuffed full of so-called "daylight" fluorescent tubes, connecting wires and tin plate. Light is emitted on the subject via a white, frosted, perspex front panel, criss-crossed with magenta strips - supposedly to correct minor colour balance errors. They're quite cheap too. I think we paid about £130 for the pair, second hand, a few years back. 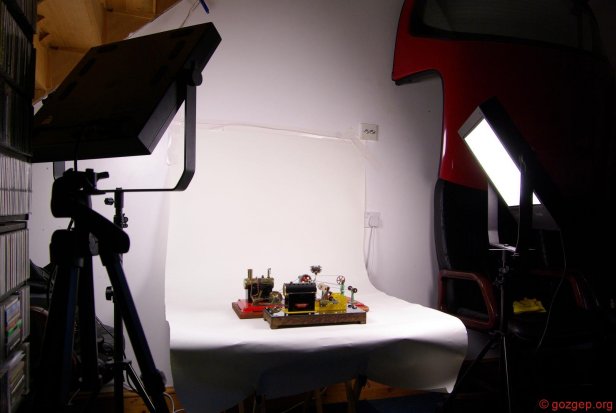 They're not as bright as studio flash, so one has to make compromises on the camera. Shooting at a distance that varies between about 0.6 & 1.5 metres, requires camera settings of F8 @ 1/30 second shutter speed, with a film speed of 400(ASA)|27°(DIN). So you need to hold the camera quite still (or on a tripod), the depth of field is not particularly great and even with a reasonably decent (D)SLR (Pentax K10D) you are right on the edge so far as acceptable grain is concerned. And you need to set the camera colour balance manually since they are not real daylight!

We use cookies on our website to give you the most relevant experience by remembering your preferences and repeat visits. By clicking “Accept All”, you consent to the use of ALL the cookies. However, you may visit "Cookie Settings" to provide a controlled consent.
Cookie SettingsAccept All
Manage consent

This website uses cookies to improve your experience while you navigate through the website. Out of these, the cookies that are categorized as necessary are stored on your browser as they are essential for the working of basic functionalities of the website. We also use third-party cookies that help us analyze and understand how you use this website. These cookies will be stored in your browser only with your consent. You also have the option to opt-out of these cookies. But opting out of some of these cookies may affect your browsing experience.
Necessary Always Enabled
Necessary cookies are absolutely essential for the website to function properly. This category only includes cookies that ensures basic functionalities and security features of the website. These cookies do not store any personal information.
Non-necessary
Any cookies that may not be particularly necessary for the website to function and is used specifically to collect user personal data via analytics, ads, other embedded contents are termed as non-necessary cookies. It is mandatory to procure user consent prior to running these cookies on your website.
SAVE & ACCEPT